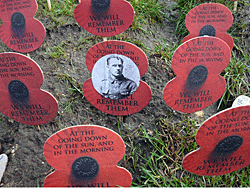 The Legion safeguards the welfare, interests and memory of those who are serving or who have served in the Armed Forces.  We help serving and ex-Service personnel and their families. Not just those who fought in the two World Wars, but also those involved in the many conflicts since 1945 and those still fighting today.

Each year the nation expresses its unequivocal support for the Legion’s work through its generous support of the Poppy Appeal. It is one of the best known and supported campaigns in the calendar. The Goudhurst Branch contributes to this every November with some enthusiasm in the Parish.
The Legion’s Values:

The branch was formed in 1927, has a membership of around 60 and welcomes anybody who would like to join. Please phone Mr Richard Dixon 01580 212623 for more details. Membership is not limited to ex-servicemen and women; anyone who supports the Legion’s Values is welcome to join for modest annual subscription.
Local branch meetings are held in Goudhurst in February, March, April, May, June, September, October and November. For venues and times of particular meetings, please check with the Branch Secretary. In addition, we have an annual fund raising day in early May, and we take a fund raising stall at the Goudhurst Village Fete at the end of June. An Annual Dinner is held locally with a distinguished guest speaker. We strongly support the annual Poppy Appeal in the lead up to Remembrance Sunday.
The Goudhurst Branch were active in sending ‘goody boxes’ to our front line troops in Afghanistan. From the letters we received in return, we know these parcels were very welcome..