The earliest record of St Mary’s Church, Goudhurst, is dated 1119 in the reign of Henry 1. There was probably a church on the hill above the village long before then, perhaps even in Saxon times. From the present tower it is said that you can see (on a clear day, and presumably with a telescope!) an many as fifty-one other churches, from Lympne by the marshes to Ide Hill on the North Downs. Formerly this prospect would have been ever more remarkable, for when the tower was built in the early part of the 14th century it was one storey higher and crowned with a spire.

The spire stood until 1637 when, during a summer storm it was struck by lightning and burned to destruction. To the North-West, Canary Wharf Tower in London can now be seen, a distance of forty miles.

The earliest church would have been a simple structure, probably on the line of the present south aisle. For hundreds of years the approach was from the south rather than the west as now, for until 1768 there was no road through the village on the line of the present High Street. The narrow Iane on the south side of the church, called Back Lane, was then the only highway.
Though the south door (still used occasionally) has a rounded arch, it is not Norman but middle 14th century. Stonework within the church survives from all periods after the 12th century. Traces of 13th century lancet windows can be seen in the walls of the Sanctuary. The colonnade dates from the early 13th century and is of limestone from Caen in Normandy. The exterior is built of Kentish ragstone.

Chief of the church’s treasures is the rare monument in painted wood to Sir Alexander Culpeper and his wife. A fine memorial to other members of the Culpeper family is to be seen in the Bedgebury Chapel. Of three ancient brasses in the chapel, the oldest dates from 1424 and commemorates John Bedgebury who went to Agincourt to fight with his king, Henry V. 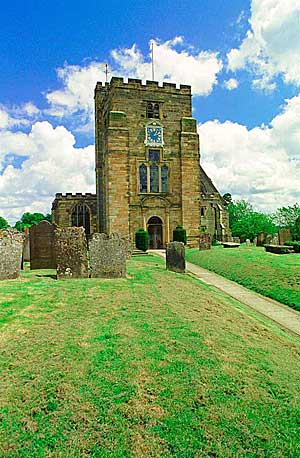 Before the Reformation a rood screen and loft spanned the east end of the nave and side aisles. It was removed some time about 1560. Parts of it were used to make the screens of the two side chapels. A door in the north aisle led to the rood-loft turret.

During the Battle of Britain in 1940 two parachute mines destroyed most of the glass in the church. A small panel of 15th century glass survives in the west window of the south aisle. The Te Deum window at the east end is a modern design replacing a memorial window that was destroyed.

There is one other church in Goudhurst village: the Roman Catholic Church of the Sacred Heart.
Father Vic McClean The Presbytery, Beresford Road, Goudhurst, Kent, TN17 1DN 01580 211268

The church was built and endowed mainly by Field Marshal Viscount Beresford, one of Wellington’s generals in the Napoleonic Wars, who purchased the nearby Bedgebury Park estate in 1836. Built as a chapel of ease to Goudhurst, the church was consecrated in 1841, and Kilndown became a separate parish in 1843.

Originally designed by the architect Anthony Salvin as a plain sandstone box, the church was transformed over the following years into an early and outstanding example of ‘Gothic Revival’ under the guidance of Alexander Beresford-Hope, Viscount Beresford’s stepson, an ardent member of the Cambridge Camden Society, whose members believed that all churches should be built and furnished in the Gothic style.

Even before Salvin’s design had been completed, Beresford-Hope had the spire embellished to give it dignity, and erected a parapet round the outside of the roof to disguise its low pitch. He then set about the interior. A chancel was created by the erection of a richly painted screen. Inside the chancel he placed a stone altar, a copy of William of Wykeham’s tomb in Winchester Cathedral. The highly decorated pulpit was modelled on the reading pulpit at Beaulieu Abbey; stained glass from Munich was put in the windows, and the walls and ceiling were painted, the latter to represent the vault of heaven, making the interior of the church a riot of colour. 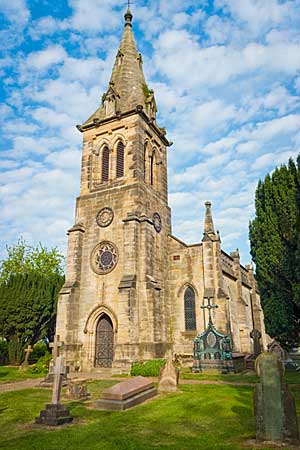 Unfortunately, the local sandstone, quarried across the road from what is now the village pond, proved to be so porous that the paintwork peeled off the walls, and the vault of heaven, becoming too expensive to maintain, had to be boarded over. To this day the parish wages a constant battle against damp.

The original organ gallery and pews were removed from the west end in 1860 and round windows were placed there and in the east end. The reredos was added in 1869. The organ, a gift of Viscountess Beresford, was first installed at the west end of the church in 1840 and moved to its present position in 1860. It was altered and enlarged in 1911, and, in 1986, owing to age and damage caused by a collapsing floor, it was rebuilt as a four- unit extension organ using much of the original pipework.

In the Second World War, bombs destroyed all the glass in the south windows. Today the distinctive character of Christ Church, Kilndown, whose architecture is of international importance, lives on. Sustained efforts have been made in recent years to bring back some of the old rich colours. These may be seen in the nave candlesticks, in the corbels supporting the hammerbeams of the roof, in the lofty arch at the west end, and above all in the pulpit, which alone took two men seven weeks to restore. The fine ring of six bells in the key of A, originally cast by Mears and Stainbank of Whitechapel in 1844, was recast by them in 1958.

The screen and chancel stalls were designed by R. C. Carpenter, a friend of Pugin and an ardent Camdenian. The lectern and chandeliers were designed by William Butterfield. The interior painting was by Willement, and the woodwork was probably carved by John Thomas, a local craftsman. The massive oak pews, the stalls, the inner door of the vestry and the inner door at the west end, were carved by craftsmen from the Bedgebury estate.

Outside, the pierced parapet, the crest to the ridge line, and the lights to the spire were added in the early 1840s by the Italian architect Alexander Roos, who was also the architect of Bedgebury and is said to have been a member of the Accademia di San Luca. The clock was placed in position in 1887 to mark Queen Victoria’s Golden Jubilee.

On the south side of the church lie the ornate tombs of the Beresford family. The Field Marshal and his wife Louisa are buried here, as well as Alexander Beresford-Hope, Viscountess Beresford’s son, whose energy and enthusiasm did so much to transform the church. The tomb of the latter is today the more striking, being constructed of various kinds of granite overlaid with bronze work. A portrait of his wife, Lady Mildred, is let into the marble at the back of the tomb. The Field Marshal’s tomb was originally more imposing but the elaborate superstructure was demolished in 1923 after becoming unsafe. The lychgate, probably designed by Slater, was built in 1860.