Goudhurst probably began as a clearing in the great forest of Anderida that covered the Weald long ago.
The name is obscure; ‘hurst’ certainly means ‘wood’ but ‘goud’ is doubtful. The earliest record of a name
(Guithhyrste) dates from 1095. The Chapel on the hill was dedicated to St Mary the Virgin in 1119 and it
grew as the small community around it grew. The nave and chancel were begun a century later and building continued into the 1300s.
In this period of two hundred years Goudhurst became a village. Farming was well established.

Around 1330 Flemish weavers came to Cranbrook and weaving spread to the surrounding villages
including Goudhurst. The Weavers Cottages date from about 1350; the village became prosperous
from the weaving of Kentish Broadcloth, which continued for many years.

In Tudor times (1485-1603) the Weald was the ‘black country’ of England; all around Goudhurst
were iron foundries. Nearby at Bedgebury Sir Alexander Colepeper’s forge produced cannon used
against the Spanish Armada (1588).
As industry flourished in the north it declined in the south and Kent became better known for
the smuggling of contraband than for manufacture – lawlessness prevailed. In 1747 Goudhurst set
a good example by putting down the dreaded Hawkhurst Gang, forming a local militia to restore
law and order.

Though generally peaceful, rural life was not idyllic. In Goudhurst, away from the industrial
revolution, cottage industries and farming declined. Poor wages and living conditions caused
unrest. In 1830 there were riots in Goudhurst and elsewhere in the south of England. Some improvements
in living standards were achieved; the ringleaders were punished but given lighter sentences than some
of their local counterparts.

The Flemish weavers who settled here preferred ‘hopped’ beer to English ale and they brought with them
new varieties of hops and the knowledge of how to use them in brewing. Small hop gardens extended and
flourished to such an extent that by the late 1800s they covered the countryside round Goudhurst as
far as the eye could see. Hop pickers from London were an annual event in the village until the 1950s
when machines displaced them. In 1870 hop cultivation occupied 72000 acres of England; in 1996 the area was 7700 acres.
Despite these changes in the rural economy, Goudhurst, like many villages, has remained much the same in size,
retaining a population between 2500 and 3000 for more than a century. Without a railway (opened 1892 – closed 1961)
it is unlikely to become a dormitory. But the diversity of its inhabitants has diminished. Once, almost every trade
and occupation was represented here, now we are fortunate to have ten shops. Even so, a Goudhurst villager of a hundred years ago could still find his way about and recognise the haunts of his youth without dismay. 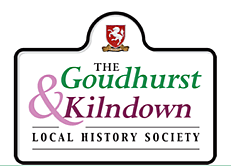 Goudhurst and Kilndown Local History Society
Meetings are held in the Church Room, Back Lane, Goudhurst, from October to May, starting at 7.45 pm. See the Society’s website for details
goudhurstlocalhistorysociety.org