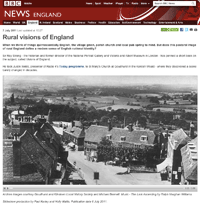 Sir Roy Strong, historian and former Director of the National Portrait Gallery and the V&A, accompanied BBC Radio Four’s Justin Webb to record a radio interview in Goudhurst.
Sir Roy chose Goudhurst to represent the heart of the English countryside in his book published on national identity, titled Visions Of England. The BBC produced an audio slideshow of the interview, which is sadly no longer available. It was produced in a format no longer in use.
http://www.bbc.co.uk/news/uk-england-14039199