A referendum on Goudhurst’s Neighbourhood Development Plan was held on 3rd February 2022, giving residents the chance to approve or decline the document, which will give guidance on future planning decisions in the parish.
The referendum showed overwhelming support for the Neighbourhood Plan on a low turnout of 25%, with 525 of 570 residents voting in favour.
The plan therefore becomes legally binding as a statutory Development Plan.
Further general information on neighbourhood planning is available on the council’s website at:
https://tunbridgewells.gov.uk/planning/planning-policy/neighbourhood-plans
For queries regarding planning issues and neighbourhood planning in general, please contact the Planning Policy Team on 01892 554056.

Located in the heart of Goudhurst, The Vine Inn has re-opened under new management.
High Street, Goudhurst (01580 212627)
It is not yet included in TripAdvisor’s guide to restaurants in the village.
TripAdvisor In its recent Summer Cycling Guide, The Times Weekend featured cycle route 18, which passes through Goudhurst, covering 41 miles between Tunbridge Wells and Ashford.

The article mentions Sustrans, which has further details:

For those who want to tackle the full 41-mile run, which forms part of the well signposted National Route 18, there are dedicated cycle lanes, running alongside main roads at both Tunbridge Wells and Ashford.
Other than this, the main traffic-free section is through Bedgebury Forest.
This route is an excellent way to take in Kent’s quintessential Garden of England scenery, complete with hops, apple orchards, oast houses and picture-postcard villages….

Despite opening only 18 months ago in what was once The Globe & Rainbow, The Smallholding Pub & Restaurant has quickly established itself as a significantly good place to dine out. Food writer Grace Dent awards it 9/10 for food, atmosphere and service in yesterday’s Guardian review. 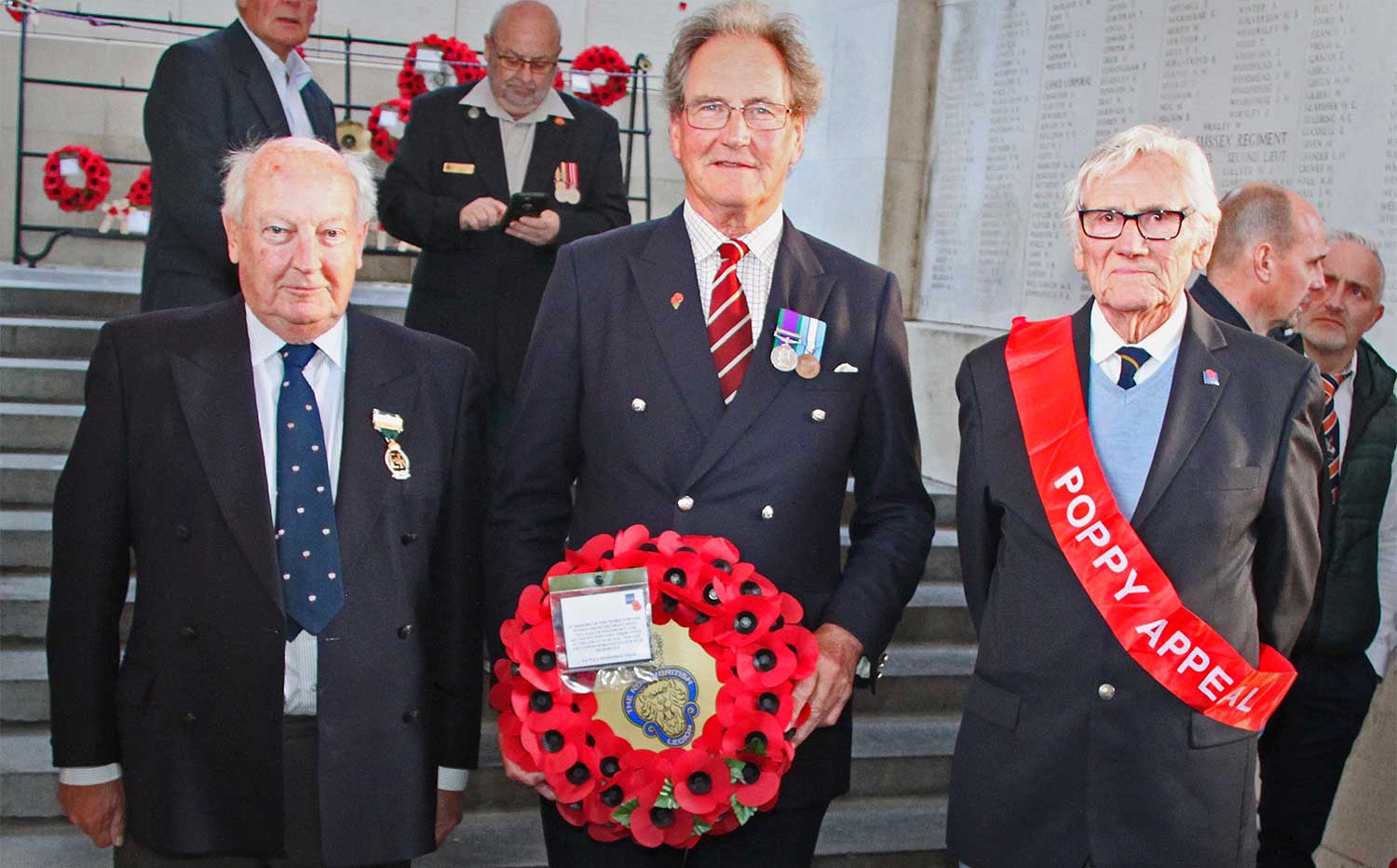 At the centenary of the Armistice approaching, 35 Goudhurst & Kilndown parishioners undertook a pilgrimage to the Great War battlefields around Ypres to commemorate the 68 men and one woman from the parish who died in the First World War. All their names were specifically mentioned at some point along the route.

The group paused at the cemetery where George Chestney, once a gardener at Brandfold, lies buried; at other cemeteries, brief services were conducted by the Rev. Hugh Nelson at the graves of William Roff and George Luck, farmworkers before the war. Members of both these soldiers’ families, visiting for the first time, placed poppy wreaths on the graves.

The group heard commentaries from Royal British Legion branch chairman Tim Nicholson and local historian Roger Joye at some notable locations, including the scene of the crucial action led by The Buffs against the first ever gas attack by the Germans (April 1915), and the advance of the British army towards Passchendaele (July – November 1917).

The group later moved on to the Menin Gate memorial, where the names of six men from Goudhurst and Kilndown are carved among those of 55,000 British and Empire soldiers who died in the area and who have no known grave. The standard of the Goudhurst & Kilndown branch of the Royal British Legion, (handled by Mick Harris) was on parade at the Last Post ceremony, and a wreath was formally laid. 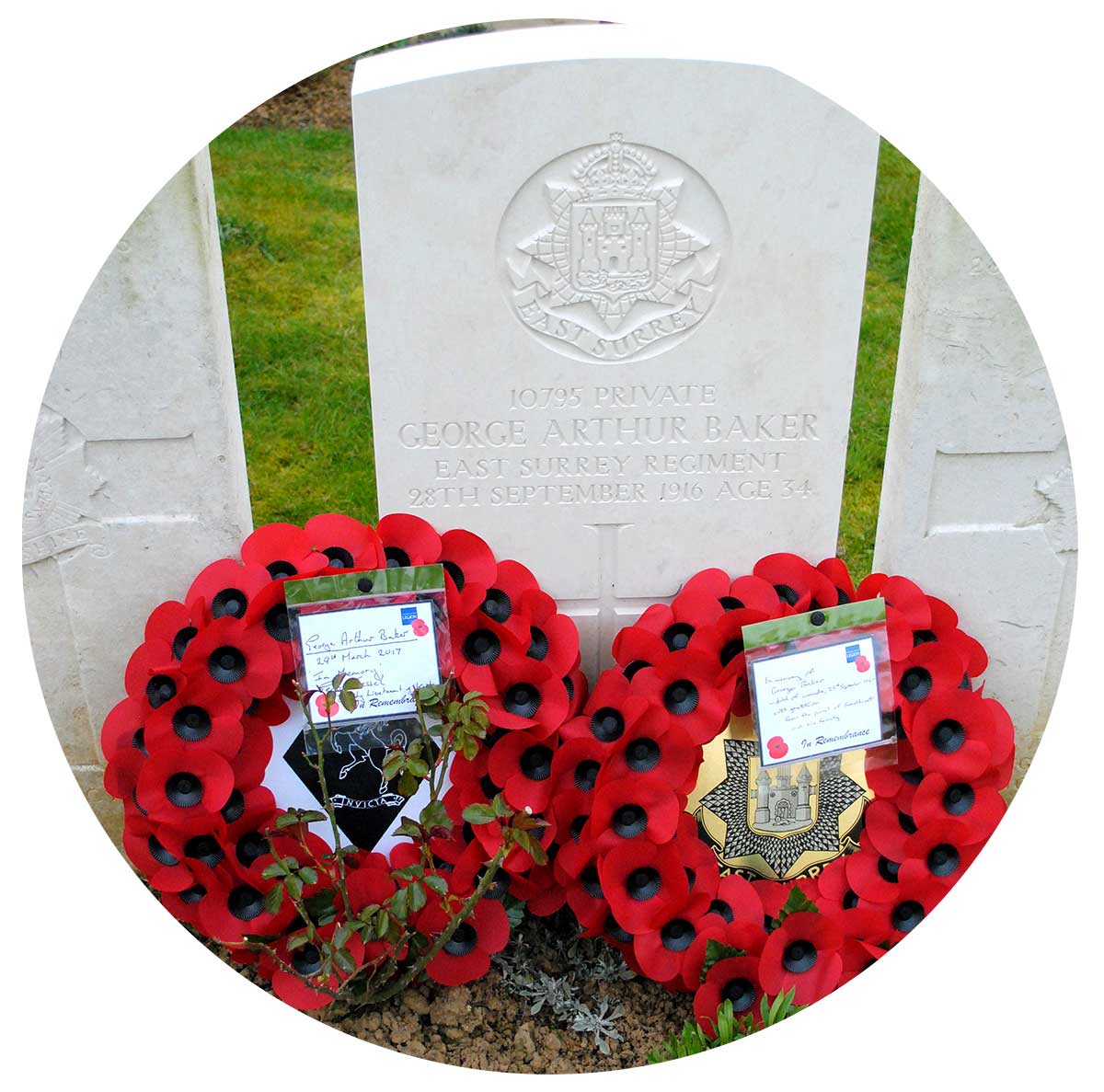 Luck, coincidence and diligent research combined to replace the headstone on the war grave of a Goudhurst man, George Baker, one hundred years after he died during the Battle of the Somme.

In 2007, the late Bob Brown, then chairman of Goudhurst’s Local History Society, discovered that George Baker’s headstone showed his name as Barer. At his instigation, the Commonwealth War Graves Commission (CWGC) re-engraved the name, but the result was far from satisfactory, with a K being imposed over the R.

On a visit to the Somme last September, local historian Roger Joye was surprised to find a wreath of poppies on the grave even though he and his wife, fellow historian Gill Joye, had found no direct descendants, despite extensive searching.
A few days later, the exact centenary of George Baker’s death was commemorated at the war memorial in Goudhurst. It was attended by George Jessel DL, High Sheriff of Kent. When told of the mystery and the state of the headstone, he offered to contact the CWGC to see what could be done to improve the engraving.

On that same centenary day, 28th September 2016, members of George Baker’s family made an unrelated visit to the grave at Méaulte, France. They planted a wooden cross bearing just their Christian names. In October, the CWGC wrote to George Jessel to say they had installed a brand new headstone and enclosed a photograph. By coincidence, the family’s cross was included, with legible names.

Gill set about tracing the names, constructing a family tree descending from George’s sister, Mary. Contact was then made with the family. It was then learned that the wreath Roger had seen had been laid by George Baker’s 14 year-old great-great-niece, Miriam Small, during a school visit in July 2016.

In March this year, to commemorate the renewal of George Baker’s headstone, Goudhurst & Kilndown Local History Society, the Goudhurst branch of the Royal British Legion and Great War Battlefields of Goudhurst arranged for a group of local people to attend a ceremony at the Cemetery at Méaulte.
Poppy wreaths were laid on George’s grave (pictured) and the Last Post was sounded. Ceremonies were held between 2014 and 2019 at the war memorials in Goudhurst and Kilndown on the hundredth anniversaries of the deaths of 69 parishioners who served in the First World War.

A dedicated page has been created by historian Peter Rolington detailing the local men and women who died in the First World War, with their centenary dates. Sir Roy Strong, historian and former Director of the National Portrait Gallery and the V&A, accompanied BBC Radio Four’s Justin Webb to record a radio interview in Goudhurst.
Sir Roy chose Goudhurst to represent the heart of the English countryside in his book published on national identity, titled Visions Of England. The BBC produced an audio slideshow of the interview, which is sadly no longer available. It was produced in a format no longer in use.
http://www.bbc.co.uk/news/uk-england-14039199

The British Legion in Goudhurst has its own dedicated page

CONTACT KENT POLICE:
For all non-urgent incidents or enquiries, call 101
If a crime is in progress or life is in danger, call 999
If you are deaf or speech impaired, text ‘Police’ and your message to 60066
For news, advice or details of your neighbourhood officer, visit www.kent.police.uk